Do You Have Runner’s Knee? 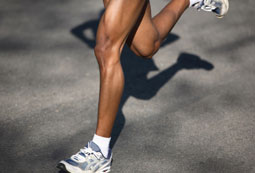 Do you have a pain around and sometimes behind the kneecap? These symptoms characterize runner’s knee, which is often caused by overuse or repetitive motion. Other less common causes are acute trauma, such as a fracture or degenerative condition like arthritis. Most runners have experienced (to varying degrees) symptoms from the most common overuse injury – patellofemoral joint syndrome (pain under the kneecap). Over time, the cartilage under the kneecap becomes worn and hurts. That’s runner’s knee.

Patellofemoral Joint Syndrome or Anterior Knee Pain Syndrome is characterized by aching, sometimes sharp pain, made worse by weight bearing. Squatting, stooping, kneeling and sitting for long periods, running and walking up and downstairs or inclines usually exacerbate the symptoms. Swelling, popping and cracking may also be present. Causes may include over-training, poor mechanics (due to weakness or imbalance of the quadriceps or hamstring over-used or inappropriate shoes, and anatomy which allows poor tracking of the kneecap in the groove at the front end of the femur (thigh bone).

Treatment options include the usual RICE prescription (rest, ice, compression and elevation), anti-inflammatory medications, strengthening the hamstrings and quadriceps, balance and alignment training, using shoes that control hyperpronation (inward rotation of the foot while walking), modified activities and limiting distance and running on hills. Usually, pain related to this syndrome is caused by injury to or softening of the articular cartilage on the undersurface of the kneecap. Most effective treatments alleviate some of the load pressure on the cartilage. This may allow some healing of the joint surface as well. Most knee pain is easily corrected if properly managed.